← more from
Thrill Jockey Records
Get fresh music recommendations delivered to your inbox every Friday.
We've updated our Terms of Use. You can review the changes here.

Leaving None But Small Birds

by The Body and BIG|BRAVE 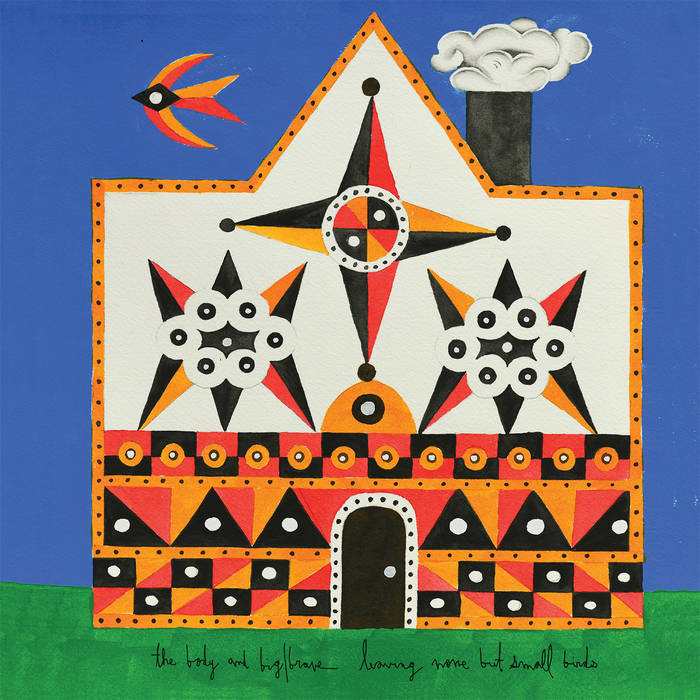 Was not expecting to hear folk-y, stoner-y deliciousness from this collab. Really hits the sweet spot for me that bands like Arbouretum do. 10/10 Favorite track: Blackest Crow.

Max Donin This record has a human soul. A timeless spirit of sorrow and joy.

Jessie Timeless and endlessly moving, this piece of folk art is a balm for my weary heart and fractured soul.

The Body and BIG|BRAVE are bands possessed of an unequaled ability to convey overwhelming weight with simplicity, repetition, and detailed sonic atmospheres; artists who continue to alter the definition of what it means to be a heavy band. The Body are consistently prolific while increasingly ambitious as untethered producers and collaborators. BIG|BRAVE shape sound with dense waves of guitar and feedback, minimalist and hypnotic crashes, and emotionally exacting vocal melodies. In collaboration, The Body and BIG|BRAVE shift the gravity of their compositions to woven layers of percussion and unspooling guitars that sprawl through stark frameworks of earthy folk. Their debut collaborative album Leaving None But Small Birds distills the two ensembles’ pioneering approach to heavy music into psalms for the forgotten, threnodies of lost love, and odes to vengeance.

Typical to The Body’s creative process, Leaving None But Small Birds was composed almost entirely in the studio at Machine With Magnets with engineer/producer Seth Manchester. The Body and BIG|BRAVE aimed to challenge themselves to craft a fully realized and cohesive work that strayed outside the boundaries of the music they make individually. The Body’s Lee Buford set up the initial challenge: collaborating to make an album that evoked the country and folk roots of The Band. BIG|BRAVE’s Robin Wattie compiled lyrics and melodic lines from across Appalachian, Canadian, and English hymns and folk songs. Select phrases were then reworked and precisely arranged to center the experiences of marginalized characters, victims of hardship, and those yearning for love within each story. The despair and empowerment of these traditional tunes draw remarkable parallels with each group’s focus on championing people often cast aside in history. Leaving None But Small Birds takes its name from the “Polly Gosford” lyric “He covered her grave / and hastened home / Leaving none but small birds / her fate to bemoan,” an image in traditional songs evoking the alienation and isolation of the persecuted. The Body and BIG|BRAVE, following a folk tradition, make each song their own through shifts in perspective and a synthesis of passages from kindred tales.

Leaving None But Small Birds transfigures The Body and BIG|BRAVE’s heft into a daring diversity of sounds unbridled and austere. The loping opener “Blackest Crow” implements gusts of violin and harmony against the bedrock of a droning riff and shruti box that subtly shifts timbre. “Hard Times” threads stories of indentured and child factory laborers through cascading trellises of rubato guitar as Wattie’s petitions are swallowed by the swell. The Body and BIG|BRAVE’s maximalist rumble looms at the fringes of each song as guitarist Chip King’s (The Body) staggering drones seep into their fabric with resolute percussion from Buford and BIG|BRAVE drummer Tasy Hudson punctuating with their steady current. Wattie and fellow BIG|BRAVE guitarist Mathieu Ball twirl repeating phrases around one another into restrained meditations that bend and shift incrementally. Hudson joins Wattie in harmonized duets and hockets across the album, enhancing the loneliness of “Once I Had A Sweetheart” and laying bare the raw brilliance of “Black is the Colour.” “Polly Gosford” froths with persistently rising walls of violin, guitar, piano and trudging toms that only capitulate after Wattie spins the tragic song of femicide into ghostly revenge with “She broke him, she tore him / she ripped him in three / because he murdered / her baby and she.”

BIG|BRAVE’s roots as a minimalist folk band and The Body’s love of old-time, country blues, and folk music enable the quintet to strike a formidable balance between sorrowful lamentation and uplifting resolve to weighty effect. Leaving None But Small Birds thatches together two monumental innovative forces that render the emotionally profound with lucid, devastating vitality.

Recorded, mixed and produced by Seth Manchester at Machines with Magnets in November 2020

Bandcamp Daily  your guide to the world of Bandcamp